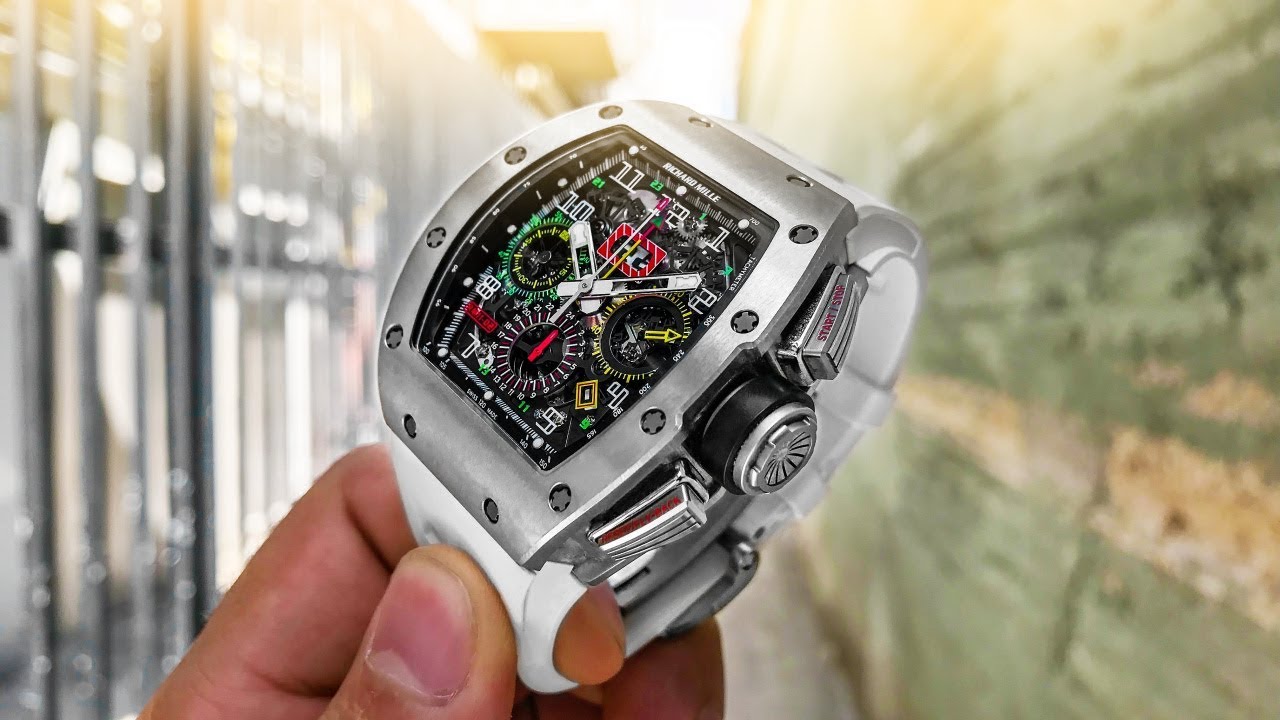 Alright, so I’ve already done a review on the standard RM11, which they call the 01 and then I’ve also done the RM 11-03, which is the newer style with the bigger case and all that stuff. Crazy part is that a lot of people confuse the standard RM11-01 with the RM11-02. Now, before this gets all confusing and becomes a tongue twister, I just wanna explain that the only difference between the 01 and the 02 is the button on the side of the case. And all that pretty much is, it’s just the GMT function for a second timezone. Now, the little button comes expensive. The little button will cost you around $20,000 extra on top of the standard price of the RM 11-01. OK, so besides the fact that it just has a button on the side of the case and another $20,000 on the price, some of the things that are also different that I want to point out are the colors on the dial.

I kind of feel like this was like the first time that Richard Mille had that color scheme going on with this watch. You see, the RM 11-03 has the same exact colors with the yellows, the greens, the reds and the oranges on the glass dial. It’s almost like the first run at the funky colors because the standard RM11 it’s not so busy with the colors, so you know what? Initially, when this watch first came out, I wasn’t too sure about the color scheme, but by the time it came out to the RM11-03, it already kind of grew on me.

So besides the colors on the dial, one of the registers for the chrono are also a little bit different. Instead of being a dedicated needle, it’s more like a wheel that’s spinning, which is also pretty cool. I’m surprised they didn’t transfer that concept over to the RM 11-03. Now, how do I feel about the button on the side of the case? I mean I don’t think it’s…I’m not that crazy about it, you know? Kind of feel it’s just a protruding button on the side, but overall, it’s definitely a different model. That’s all [bleeping] good man a sleek ass sailboat on the God damn yacht, if you even call it a yacht. It’s more like a [bleeping] ship! So this RM11 in the GMT version comes in titanium or rose gold. 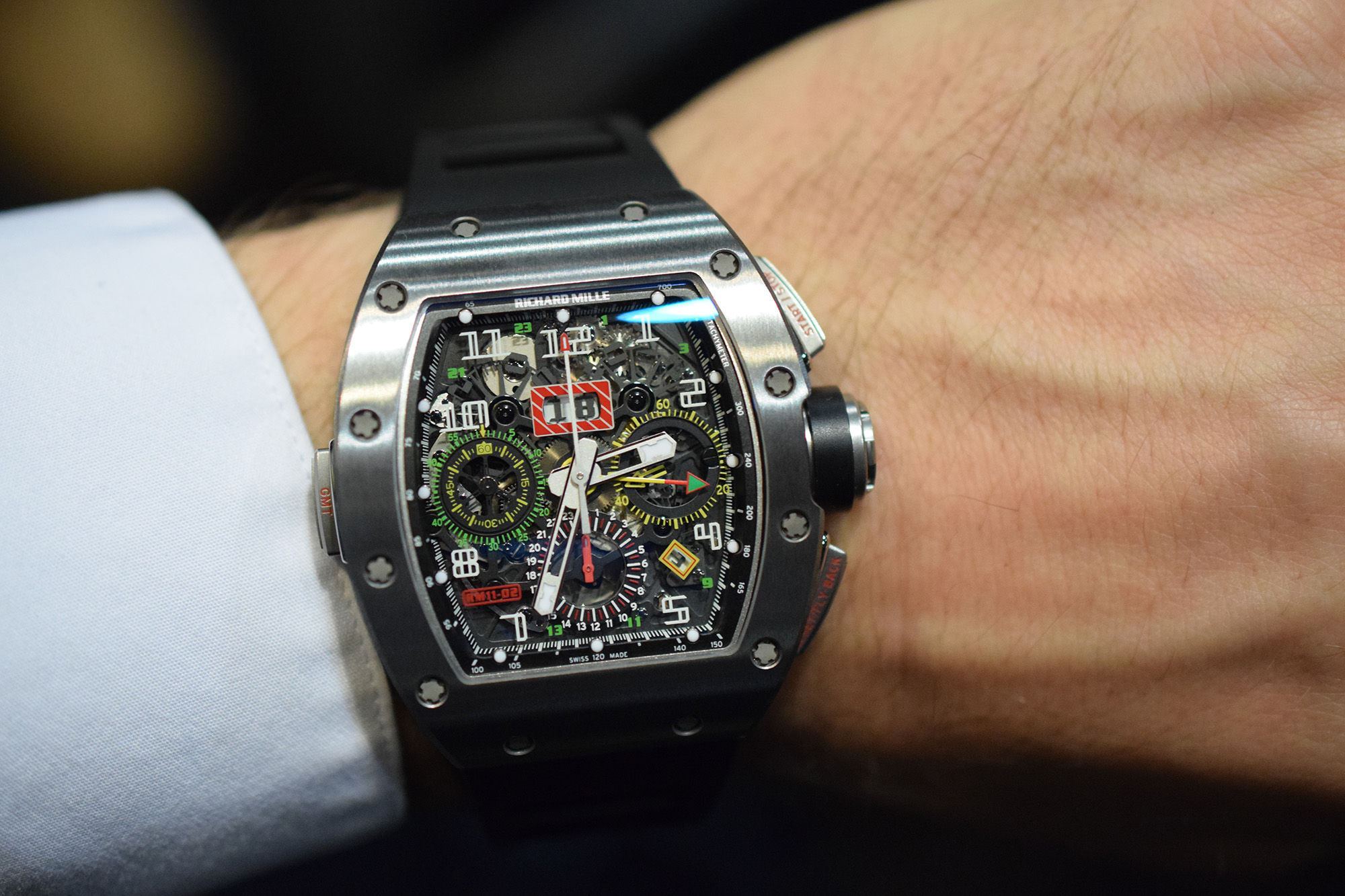 This particular example that I have hear happens to be the titanium version. Now the strap is off the RM 11-03, which it’s got the new gill shapes that I like better. But overall, it’s a cool looking watch man. I mean, I don’t know if I wanna pay an extra $20,000 for the button on the side. When you compare it to a standard RM11-01 in titanium, you’re gonna be dropping about a hundred ten to a hundred and fifteen thousand for a pre-owned one. When you go over to the 02, you’re gonna be in the $135 range. So I don’t know, do I really wanna have an extra button with an extra time zone for 20 g’s, I mean it’s not bad. I just think at the end of the day maybe I like best the standard RM11-01. Now, the way the actual GMT button works, it’s pretty simple. You just push it right here and right ahead you can adjust the 24-hour hand for the second timezone. Very simple to do. I mean, I don’t know. Kind of like the Patek 5990, I kind of feel like with the wrong wrist movement you can adjust the time and kind screw up what you were trying to keep track of.

So in the watch game, it’s obviously a heavy hitter. I mean, with the $20,000 button, it’s obviously not your average RM 11 titanium. So you know, any time you got a Richard Mille that’s not an RM10 or an RM5, you obviously gonna be flexing muscle in the Game, so it’s definitely a heavy hitter. Overall, I like it. I mean, what can I tell you? It’s grown on me for a while. Initially when they first came out, the first time that I had one in my hands was a rose gold version and I never really got around to do a review on it and for a while I actually haven’t seen one in quite some time.

So now that I have this one available, I decided to do a review because I kind of wanted to go back and touch base on that model. So feel free to comment below how you feel about paying an extra $20,000 for a button on the side of the case.

Let us know your thoughts on Richard Mille!