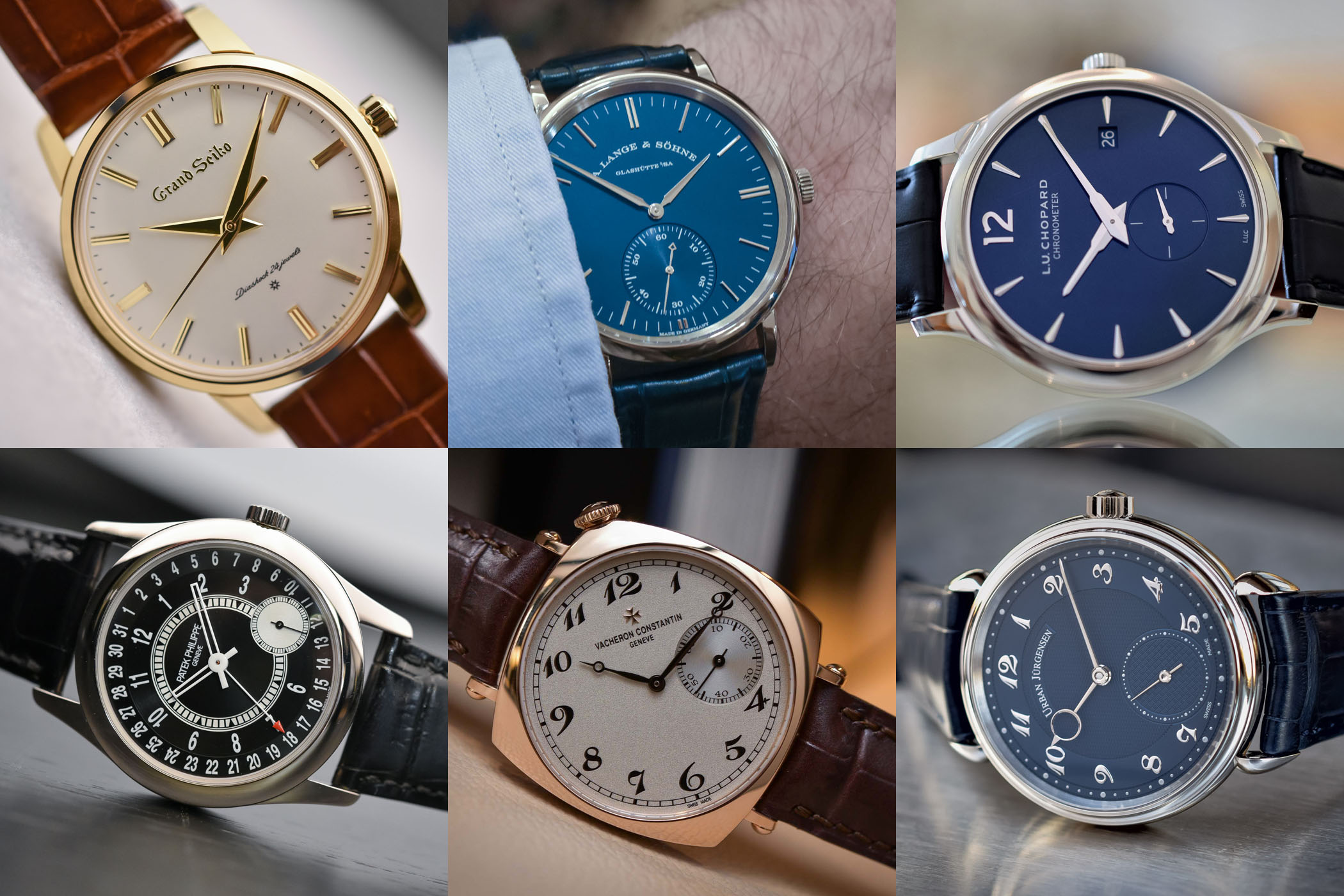 Today we’re gonna be going over the difference between a dress watch and a sports watch. Now, this is an important thing you want to focus on because if you’re active participant in the Watch Game, this could make a big difference on the effect you’re trying to project. Let me give you guys an example and tell you a quick story. One day, I was going to attend a wedding here in Miami and it was one of those days where you just have so many things to do that, before you know it, I was getting dressed for the wedding. And, when I put my suit on and I went to grab my watch, I realized that I did not go to the bank that day and pick up my dress watch. So my options were limited and when I mean limited, I’m talking about extremely. The only thing I had that day to wear was, don’t even ask why ask this watch, cuz I don’t want to get into that topic either, but it was a Yacht-Master II two-tone.

So me being a watch guy at heart, I said, ‘Man, I can’t go without a watch. I don’t wanna be without a watch. I feel like with no weapon!’ So I pretty much wore the watch. Needless to say, an hour and a half into the reception, I felt like a complete idiot. I felt like the watch was too big. It doesn’t go with anything. It’s just completely the wrong watch to wear. Why? It was the wrong size. It was 44 millimeters. Totally the wrong size watch if you want it to be a dress watch. I think a dress watch should always be maximum 40, 41 mm. You know, in that area. Maximum, because really you’re gonna wanna be under that. A number 2 thing that’s very important is on a strap. It should be on a strap. Whether it’s calf, alligator, crocodile, you need it to be on a strap. Another important thing for me is one type of metal. That day it was a two-tone, stainless steel and rose gold, incorrect! I think you should stick to one color metal, would be the ideal scenario.

So you wanna avoid these mistakes and some of you guys might not even know this, but not every watch can be worn for everything. That particular watch, the ideal watch that I would have like to have been wearing, would have been a Sky-Dweller on a strap. Yes, I get it. It’s over 40 millimeter. Whatever! Rolex is very conservative, but it’s nowhere compared to that 44-mm Yachtmaster I had. I had, by far, the worst possible watch in my opinion for that scenario. I felt like a complete idiot, so these are things you wanna think of. In a good watch collection, you should always have a dress watch. If you have a very young collection, where you don’t have that dress watch yet, then perhaps maybe you want a versatile watch. For example, one sports watch that happens a diver watch that I feel can be used for almost everything is the Submariner in stainless steel. Can’t go wrong with it. You could dress it up. You could dress it down. It’s one of those watches that does it all. For example, gold Sub is not the same.

I just don’t feel like it’s the same. This is a watch that I feel works better in shorts, very casual wear. Doesn’t give you the most effect in a formal situation. Now, to throw a whole another extreme…the Presidential. The Presidential is that one watch that I feel always looks dressy in a suit. It’s one of the few dress watches on a bracelet that I like. Whereas I would, yes, rather have a Sky-Dweller on a strap or a great Daytona on a strap, even though it’s a Chrono. You know, sports model? But the Presidential is one of those watches you get away with and you can also dress it down. So, it’s an ongoing topic, dressy versus sporty. When a guy comes in to the store and he’s trying to buy his first watch and I say, ‘Listen, do you wanna go dressy or do you wanna go sporty?’ That’s a very important question. 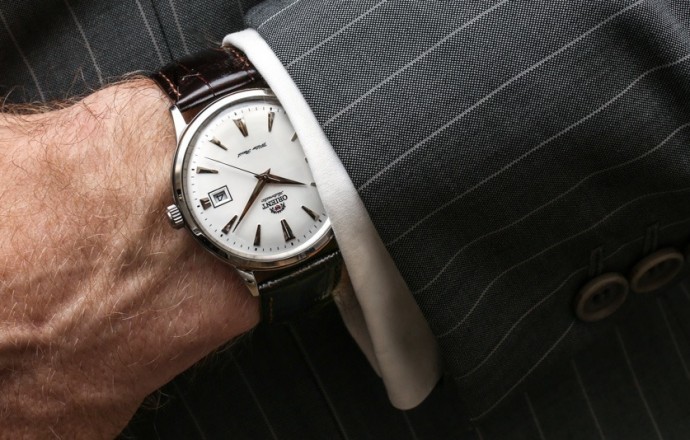 If a guy is always in a kind of like an office situation, then he might go dressy if you’re gonna use it for work. If he’s only gonna use it to go out at night, to go to nice dinners and stuff like that, again, you wanna maybe go a little bit dressy. But if you’re gonna wear it all the time, then you kinda wanna go with something that works for both. Now, I’ll give you another example where you have two watches that, in my opinion, are two different extremes. The Pakte 5980. Now in a perfect world, which we don’t live in, both of these watches are bad ass and you could do whatever you want with it. But I wanna tell you something, if I was gonna wear a suit, the one I always have is this one. The strap is the way to go. The strap, even though it’s a chrono, does make it look dressy, whereas on a bracelet, for me, it just gets more sporty. Kinda something you wanna wear more casual. So those are things that you wanna think about when you are selecting a watch.

Dress watches man, sometimes the simpler the watch, the better. This is a topic that we can go on in circles all day. You could make us sit there and say, ‘No, because the most dressy watch is the simplest watch.’ I don’t see nothing wrong wearing a Patek Sky Moon in a suit. Nothing simple about that watch. It’s full-blown complications on that. So, this is a topic that we could go over and over and go all over the place with. But I wanna just keep it as simple as possible. Dressy versus sporty. A sports watch is gonna be a diver, a chrono, a pilot. Those types of things. Dress watches is what you’re always gonna thing is gonna be very slim, very conservative. A watch that’s fits under a suit. You could tell, man. It doesn’t take a rocket scientist to tell what looks more dressy than not. So use that. Think about that.

Don’t be that guy. I have been there. I have worn a 44 millimeter Yacht-Master II two-tone to a wedding and pulled those moves where I looked like a complete jackass. Don’t be that guy! Choose the right watch for the occasion or choose the right watches in your collection and you’ll always have the right watch for the occasion. So I wanna go over some of the 5 Biggest Mistakes People Make While Wearing a Dress Watch. Number 1 is the size. Select the right size. You don’t want an overly large watch. This is one of those situations where bigger is not better. Number 2 would be the type of bracelet, a strap that comes on that watch. Some models look dressier than others, depending on the bracelet or strap that it might have. For example, the 5980, how I was saying that, on a bracelet it looks sportier than on a strap. Number 3 is, bi-color. I don’t recommend ever wearing a two-tone watch in a suit.

Always better to stick to one tone of metal. Number 4, what color metal are you wearing with that outfit? For example, you don’t wanna have a rose gold watch with a gray suit. You’re gonna preferably want platinum, steel or white gold. Number 5 is the strap color. If you’re wearing black shoes with a black belt, you obviously do not want a brown strap. So my favorite brands for sports watches is probably gonna be Audemars Piguet and Rolex, and for dressy, more formal watches, I feel like Patek has that on lock. Also I’m a fan of the Breguets and Vacheron. I feel like those watches overall they give you the best look for that type of distinction that you’re trying to get with a dress watch.

So, like I mentioned earlier man, this is a topic that can go around in circles and circles, and at the end of the day, I’m a watch guy, so most of my decisions are gonna be more inclined, more towards watches than extreme fashion or like a fashionista would say, whatever! To not go around in circles, but can you wear a sports watch to a formal occasion? I guess you could do whatever you want, you know? I did it and how did I feel? Like an idiot! I would have given anything to have that day this watch instead of the two-tone Yacht-Master II.

Comment below or the boss will whip us again. Please help me I’m in a sweat shop and we don’t get paid enough money.