A Review of the Patek Philippe Nautilus 5980 Now, the Nautilus is one of the most conservative and proven models out there. Originally designed by Gerald Genta, the same guy that designed the Royal Oak case; so, as far as that, it’s just a proven design. But the 5980 is the chrono. My opinion…it’s my favorite one. There’s also the 5711, 5712…a couple other models there that are slightly different combinations and complications, but this is the chronograph version. It’s my favorite model. The Patek is always going to make a very conservative watch. They’re never going to make an oversized, gaudy watch. It’s gonna be always very conservative. So, for the 5980, what I like about it, is that it’s a little bit thicker, so you get a little bit more size there.

You know, it’s not so slim. For me, at least, that’s very important, besides the fact that I just love the dial layout of the 5980. So, that being said, Patek is not the type of watch that’s going to attract the clients that want very edgy and sporty watches. I have several friends and clients that are athletes that have called me in the past, very excited about the Nautilus. Perhaps maybe they’ve seen some of the photos we posted online or on Instagram and I guess when you see it in the perspective of photographs, you might want to think it’s something else. But when they come to try the watch on, granted these are athletes, so they’re big guys. When they try the watch on, it’s kind of sort of disappointing for them because they find the watch to be very small and conservative. So it’s not necessarily for everybody, you know? This is a gentleman’s watch really. It’s not meant for the guy that wants to have the big, trendy, flashy watch.

Patek is not about that. This is going to be a proven design that’s never going to go out of style and because they don’t push that envelope that far, that’s what happens. You get a very conservative looking watch. However, that doesn’t change the fact that it’s a very heavy watch in the Watch Game. My God, that’s like a heavy hitter right there. There’s a couple different variations of this model. You have the stainless steel version and you also have the rose gold on the strap, which is one of my favorite ones.

Although this bracelet one right here example I have, is absolutely stunning and it’s just…what a classic, beautiful piece. But the one on the strap happens to be the one that just calls me the most. So besides the obvious design features and proven heritage I was talking about in the past about Patek, one mayor thing about them is value. Patek, if there’s any brand in the watch market that I would put any money in the world with 100% confidence, it would be the Patek Philippe. 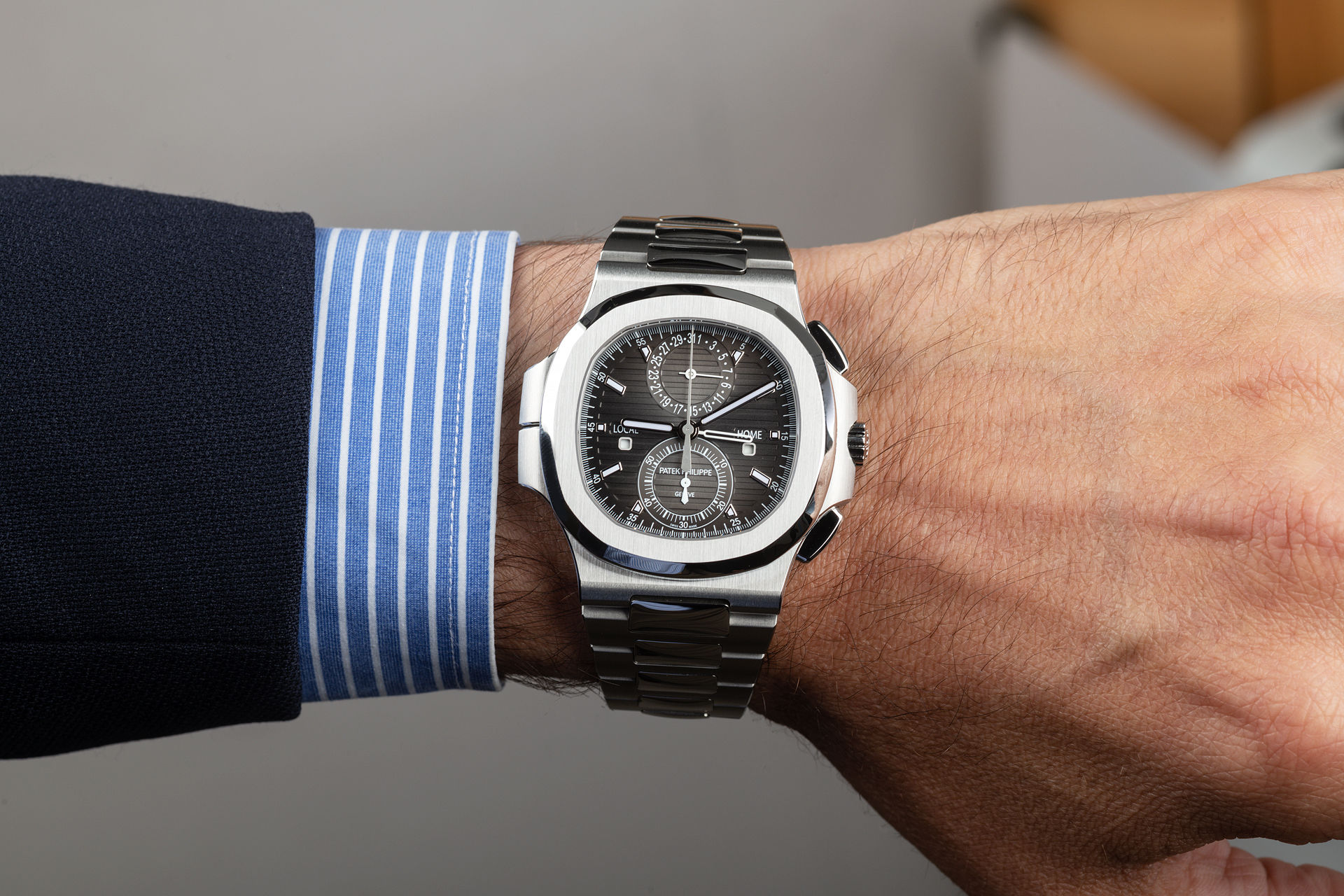 I mean, Patek is not going to ever fail you. Maybe with the women’s models, I would be a little bit worried, but with the men’s models, you can pretty much put all the money you want into a men’s Patek in several of them and it’s going to be the safest investment you’ll ever make as far as watches, because Patek is one of those watches that holds…on the contrary, a lot of times, they go up in value. Because Patek is one of those brands that right now they bring out 5980…beautiful watch, a success. Any other brand, would just whip them out like hotcakes. Patek, on the other hand, makes a bunch of them, not too many. All of the sudden, they shut down production.

The party is over. Discontinued! So there’s always going to be that demand for the product, which is always going to drive the price of the product up. So that’s one of the most important things about a Patek…it’s just, that’s money in the bank. That’s the most ultra classy watch you could buy. As far as values goes, it just doesn’t get any better than Patek. As far as quality and finish, amazing. If you ever have a chance to loop a movement of a Patek, you’re going to see that it’s just quality, quality, quality. Everything is hand-made, hand-finished. These are the type of watches that are not rushed. Honestly, I don’t know the exact production time compared to a Rolex, but just right off the top of my head I could say that in the amount of time that it takes them to make one of these, they’ll push out 35 gold Submariners.

That’s kind of why it’s that much more money. You got that much more quality and craftsmanship that goes into the watch. It’s got a perfect finish and a blend of satin and polish. Perfect dial layout, not very complicated. It�s just got a simple chrono instead of having separate sub-dials, it’s pretty much just got the two sub-dials in one, date function, not too much complication past that.

This is one of the most comfortable bracelets you’ll ever wear in your life. The only other bracelet that, in my opinion, almost wears as comfortable as this is actually, the Masterpiece bracelet. It’s very comfortable. But this bracelet fits like butter in your hand. Other than that, I don’t think there’s a single thing I could criticize. The Patek Philippe 5980R, there’s just nothing to criticize. Some people might say it’s too much money. Some people might not like it. Maybe they’re used to wearing some big Offshores like this one. And then, just when they put it on, they feel like very dainty, but then again, this is just a watch for different types of outfits. I could see myself pulling this watch off with a polo and a pair of jeans, and obviously you could pull it off with a suit. It’s a very dressy watch. It’s quality, quality, quality. It’s all I think about. Quality and value, when I think of Patek. Obviously, they’re all beautiful. The 5980 is one of my favorite ones that they make, period. The only thing I would say above that I like even better would be a Celestial or something like that. Now, when it comes to prices, when you’re buying a Patek…I know other times I’ll sit there and tell you that price and condition are the most important thing.

Of course it’s going to apply to this watch, but this is the type of watch you’ll want to buy with box and papers. It’s very important. If you’re going to get a spectacular deal, then fine. No problem. But if you’re paying good money for it, definitely you’re going to want box and papers, because on these types of watches, this is something that can make a big difference in price. Usually, whenever I put one for sale, if it doesn’t have the papers, but just the box, the price would reflect. I’ll never put one at regular price without papers. Usually, I’ll already adjust the price. People call me and say, “Man, that’s a spectacular deal!” And I’ll say, “well, it has no papers, the watch is in good condition, the price is good.” The retail on this watch is a little bit higher. It was at $90 thousand and some change and it got lowered down to $85,000. In the brand-new market, you could pay anywhere from retail to only about 5% off.

Pre-owned, you want to be in mid to high $60’s and, again, price and condition. Very important on these watches. You want to make sure it has the links. Very hard to get one of these links. You could buy them straight from an AD, but just trust me. It’s just something you don’t want to deal with. This is a type of watch you’ll want to get as perfect as possible. So, for the Patek Nautilus 5980 as far as it goes in the Watch Game, I mean that goes without saying. You know? It’s shutting it down! Now, let me tell you something. If you’re over here in Miami and you’re partying at Club Eleven and it’s 4:30 in the morning, chances are there’s not going to be a lot of watch connoisseurs there at that time. So, if you were to walk in with a Yacht-Master II fully iced out, you’re definitely going to get more attention than this watch. This is the watch that a lot of the people might not know what they’re even looking at.

But for the ones that know what we’re looking at, which is who I talk to…the 5980 is definitely one of the bullies on the block. Nothing says “I know what I have and I know what I’m doing on the Watch Game” more than a Patek 5980. For example, AP Schumacher rose gold, similar prices, two different world though. I’m not comparing the 5980 to just anything else, because I just see the 5980 in its own lane, in it’s own class. I know sometimes I wild out and I’ll do certain videos on certain things and talk crazy at times, but that’s a line that I don’t even want to cross, because this is one of the most respected watches in the Watch Game, in the business, and in the world.