A review of the Audemars Piguet Ceramic 44mm 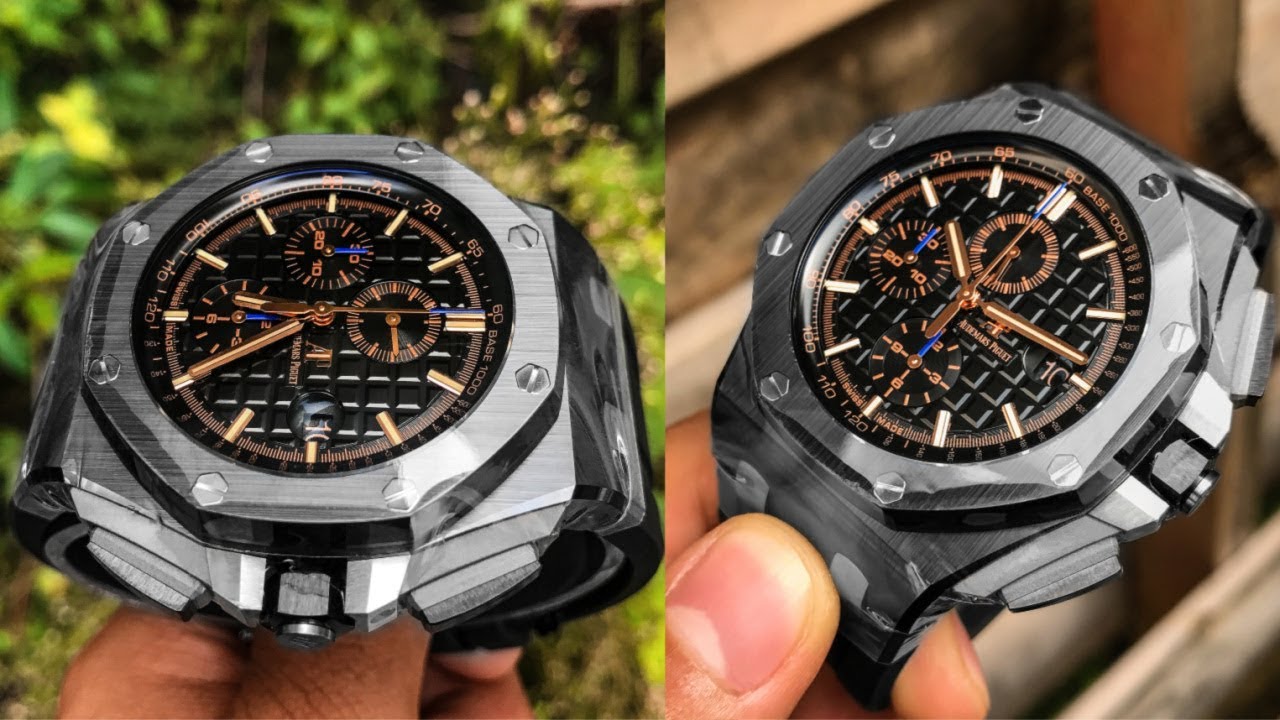 Today’s review is gonna be on the the new AP 44 millimeter Ceramic.

This version of the AP 44 mm in ceramic is the latest version and what changed pretty much is the dial layout. Because the rest of the watch is entirely the same, as far as the movement, the case size and all that. What they did this time is they did a whole different dial layout, which in my opinion really pops because it’s got some blue accents and then the hands and the indicators are rose gold, so it kind of gives it like more of a stealthy look, but it kind of also pops. So the previous version of this watch, there’s actually two examples of it. One had the same exact dial as one of my favorite watches, the AP Forged Carbon with the same exact dial, pretty much just ceramic case, but then they also came out with one after that, that had like a gray titanium colored dial, which kind of changed it up a bit.

But this is the last and final version as of now by the way of the ceramic, black case, which has the new hands layout and I for one really like it. The only thing that I really, I feel like they kind of messed up on is when it comes to the retail price. So the original retail price for the previous examples, were $41,800. I mean, it’s a bit high, but it is after all an AP in all ceramic, but then when they released this one, they lowered the retail down to $32,100.

Now that for me was kind of like a major blow because how do you make the one that looks nicer have a lower retail. I mean, it just flat out killed all the value of the previous version. So, I did feel the need for a new layout of the dial, but I don’t know exactly what was the main reason behind the retail change, because for me if I was gonna buy the previous version in ceramic with the other dial, I rather have the carbon, because the carbon one just looks more exotic with the carbon case, and plus you don’t have the fear that if you hit the watch being ceramic or drop it very hard, it won’t shatter like fine China. So if I was gonna go for the previous version, I rather just get the version honestly and saved me a couple of bucks and if I was gonna go ceramic, I’d go for this one. So honestly I just don’t understand what was the whole reason behind it, but the latest version definitely murdered the previous version.

I mean I just like it. I mean something about…for some reason you just add four dots of blue, which are just the tips of the hands and the needles and a little bit of rose gold and it has a total different feel. This watch is a good watch man. I mean, 44 millimeter is a big size, but when you go with the black, being that it’s all black, it kind of blends in and doesn’t look as big, so some of the guys with smaller wrists can try on some of these all-black 44’s and you might notice that it’s doable as opposed to maybe the steel, titanium or gold where the case looks very big, because what happens is with those watches is there’s too much contrast. You got the black strap and then you got the gold or steel colored heads that just kind of PAMM, stands out there! This being all black kind of just looks very stealthy on the wrist.

This is one of my favorite watches, these 44 millimeters, whether it’s in ceramic or carbon, because it’s super stealth, doesn’t say a lot and it’s kind of one of those watches that the guy that knows, knows. So if you’re looking to buy one of these watches, here’s the kicker… They’re going over retail. Retail being $32,000, you’re just not gonna find it. Now I don’t know if this one falls into that play where they put a low retail on purpose, but they’re hard to get right now. To get one, you’re probably gonna be in the $36,000 range.

And for pre-owned, you’re gonna easily be paying retail. Now, in the Watch Game, obviously a heavy piece, you got over 30 grand, AP, stealth mode, exclusivity. Not a limited edition or anything like that, but they’re not just sitting there waiting at the boutique waiting for you to pick it up. So for me this is like a hardcore, daily watch, something to wear daily. That’s kind of like what for me would be the best fit for a piece like this.

What do you think?